150-156 Gertrude St Fitzroy VIC 3065
When Hollywood and the Chick started exploring the Melbourne Fried Chicken scene, it was a nascent scene. But these days, it is in full swing, so much so that Belle’s Diner has been redesigned and renamed “Belle’s Hot Chicken”.

Menu options – this time it is “Really F**ing Hot”

Hollywood had returned without the Chick, and after validating it was worthy, returned with a full entourage, including the Chick, to watch him take on the “Really F**king Hot” version.
The Chick ordered the the Dark meat “Southern” style with a side of Mac n Cheese with extra pickles. And for a touch of class, a glass of sparkling wine, Brut and the Beast. I’m not sure if it was the wine or the lack of a proper flute, but it just didn’t bubble enough for my tastes, but hey, don’t judge a chicken spot by its sparkling wine!

The “Southern” style is a bit seasoned, but not spicy at all. So the Chick piled on the hot sauce from the conveniently placed bottle. It is a good way to take control of your amount of spicy if you aren’t sure what the different options really taste like.

Sparkling wine in the wrong glass, but plenty of hot sauce and a side of Mac n Cheese made up for it.

The medium spiced Mushrooms on the other hand were hotter than expected and crisped to a dark color. Wonderfully hot and spicy, recommended for any mushroom lover. 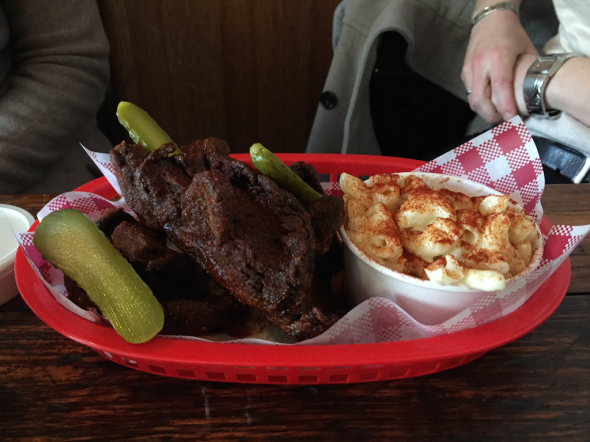 Finally, Hollywood had the “Really Fucking Hot” Tenders. The red color warns you right away that there may be some fire there. It is a heat that creeps up on you, but after a full basket his lips were burning! Not the hottest chili available, but hotter than most would care to savor. Next time the Chick is taking it up to the top notch to prove she can handle the same! 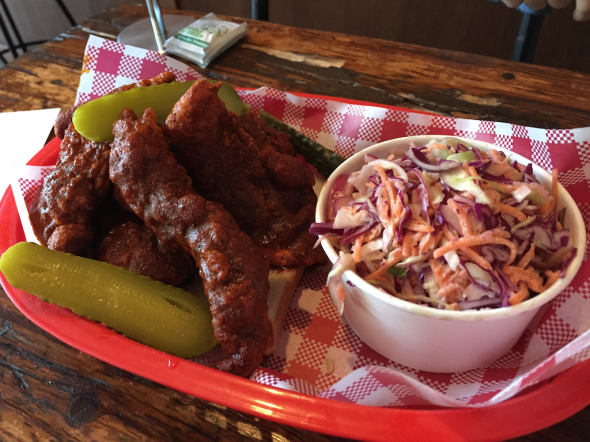