Hollywood and the boys have been trying to hit up Easey’s for a while now. They finally managed to fit in and to their surprise they had Melbourne Fried Chicken on the menu. Heres some photos of what went down 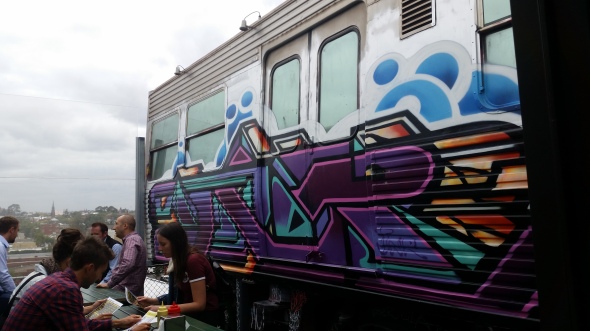 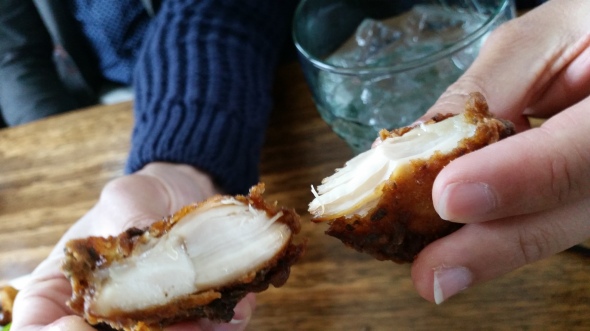 Verdict: Alright so Easey’s is a burger joint more than fried chicken. The burgers were good. The chicken portion was small (3 pieces which kinda makes it more of a side) however the chicken was really good and spiced right. The mac-n-cheese on the other hand was really heavily cheesy

One thing we forgot to mention is WE LOVE RAMEN. We’ve actually been considering starting a ramen blog and during our last visit to Japan Hollywood had a ramen a day for the entire length of our stay.

We were excited to find out a new ramen joint opened close by and we checked it out for a good slurpiliciousness bowl and ofcourse being true to Japanese cuisine there was Karaage (Japanese Fried Chicken). Check out the photos 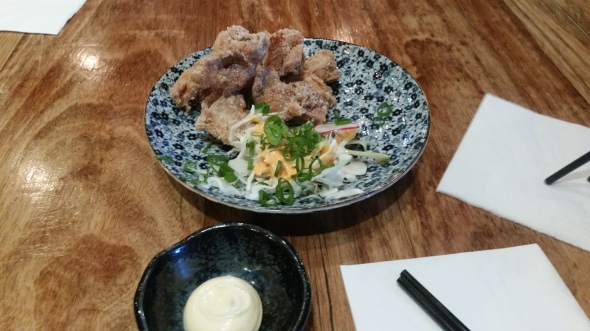 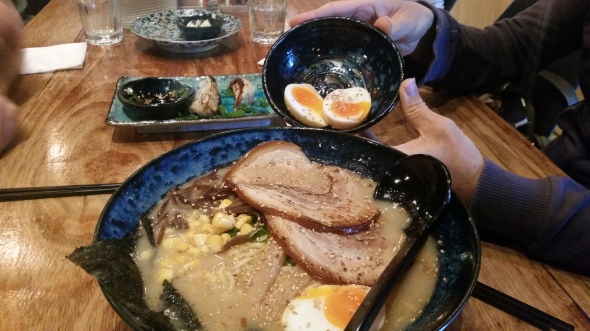 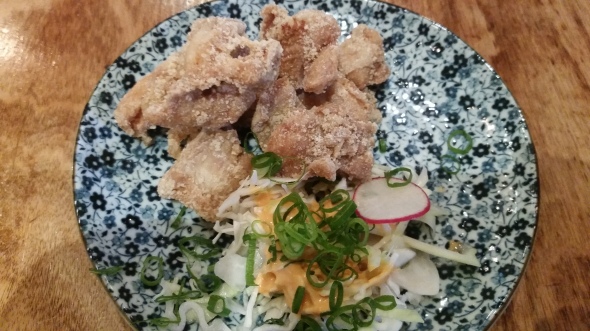 The Karaage was good, hot juicy and freshly cooked. It was accompanied with a kewpie mayo which add a twist to it. The ramen on the other hand was average, it was actually not hot, bummer! 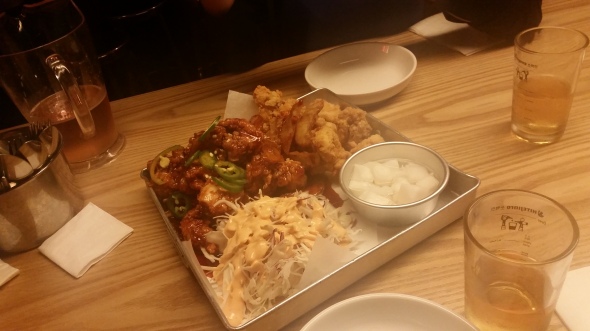 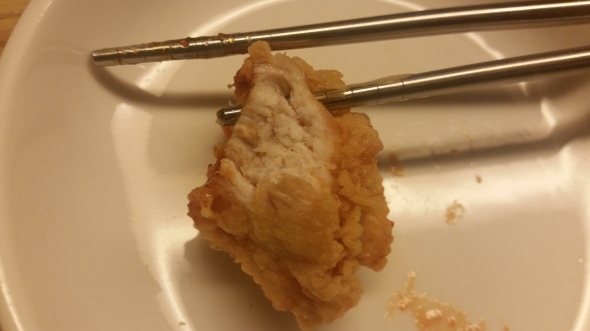 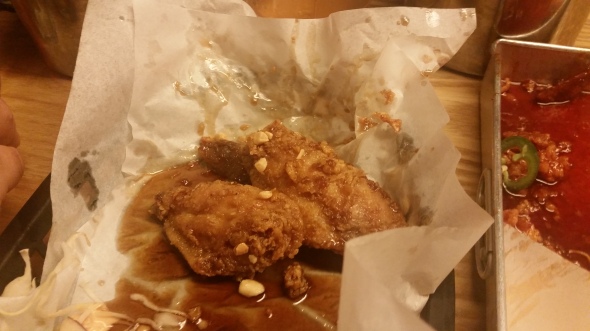 Sam Sam is a good Korean fried chicken contender that we still recommend going to.

Was time for some awesome Japanese style Melbourne Fried Chicken and we had such a great treat at Kappaya Japanase Soul Food in Abbotsford in the Convent.

We were there waiting to hear our friend perform and we decided to grab a bite. We found this cafe style place in the convent and it was boasting Japanese Soul Food! 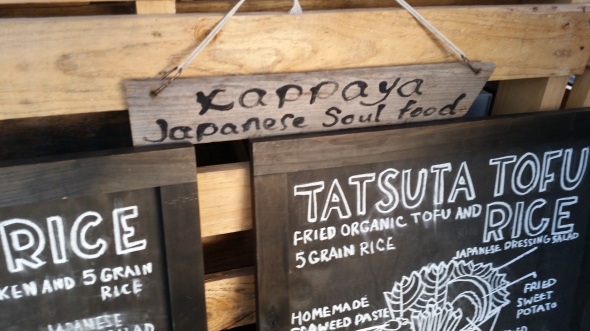 To our surprise we found tempura chicken, which we knew was called Karaage in Japan. So went with an order of that to share 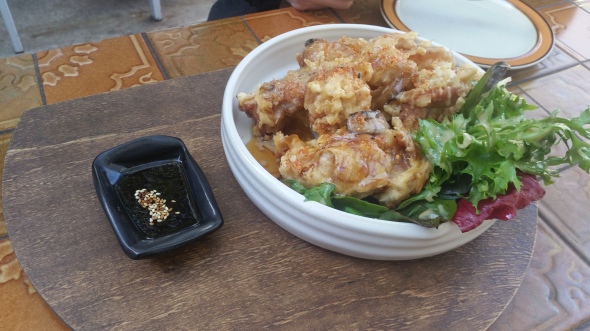 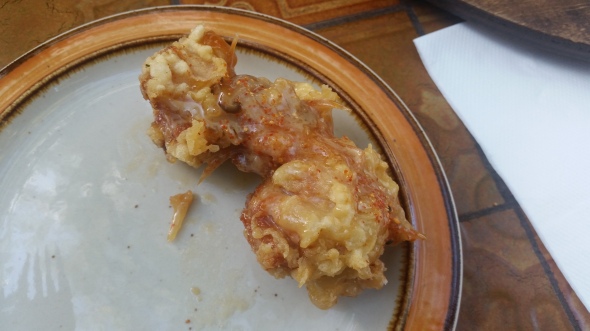 The chicken was covered in saucy mixture and was very juicy and fresh. The sauce mix did add more to the juiciness and the pieces were boneless and rather big, which made it good for sharing. The sauce was more like a batter sauce which made it a bit greasy and the side sauce did add a good taste. However overall the chicken wasnt top notch but we kinda recommend this place if you’re in the area.

Melbourne always has some food event on and since this is Good Food Month it is even more true. The sun is out and so are the red lanterns marking the Night Noodle Markets. This is the second year and they learned a lot of lessons from last year in terms of layout and seating. Sadly it was not the best place to find Melbourne Fried Chicken.

Hollywood and The Chick tried two places, one of which was severely lacking, the other was acceptable for fair food. 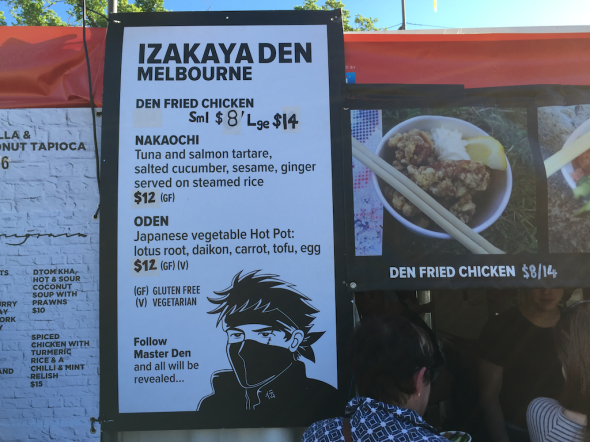 A squeeze of lemon and a side of mayo for this Chicken Karage just didn’t make up for the lack of flavor in the chicken morsels themselves.

So bad we had to bin it in hopes of finding something better. 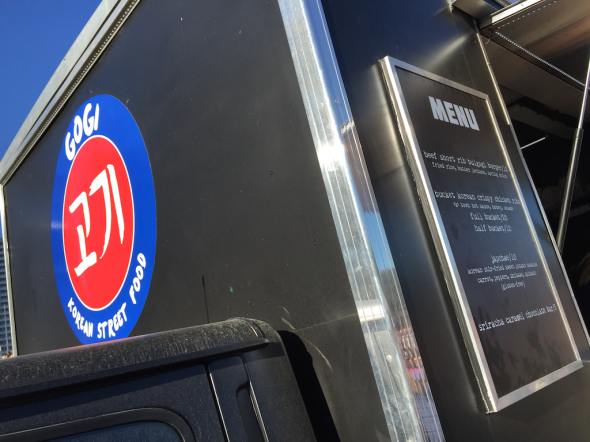 Nice nuggets with a bit of bone.

We spent around 2 weeks in Japan during July and managed to sample many dishes of Karaage from various establishments ranging from Tokyo, Kyoto and Okinawa.

Karaage was best described by a friend of ours as Japanese chicken nuggets. Here are various fried chicken photos brought to you from our Japanese trip 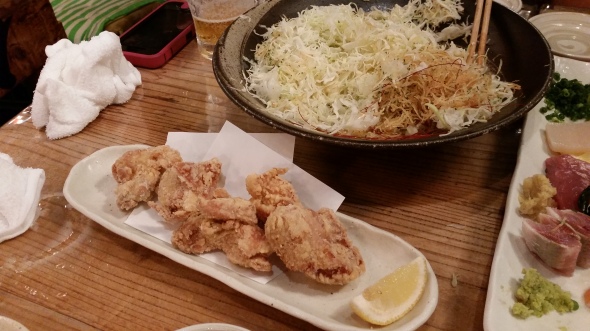 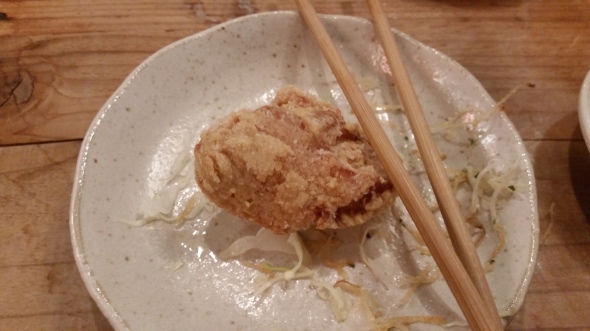 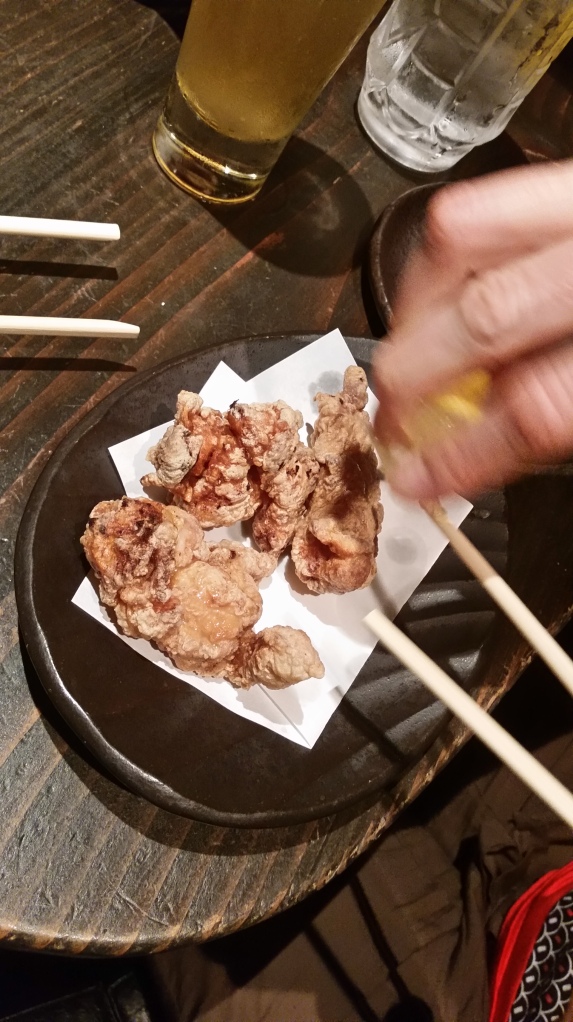 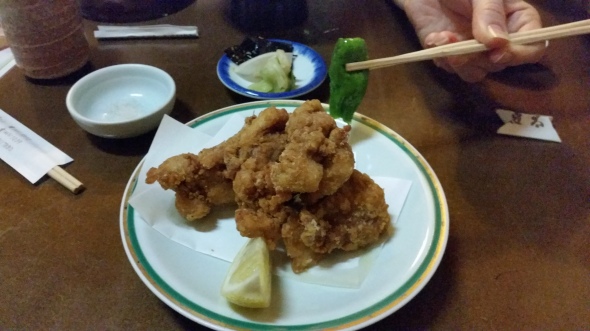 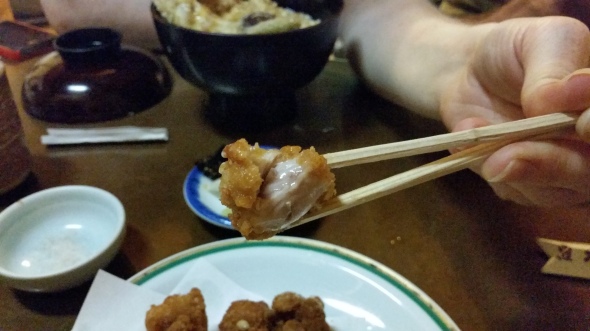 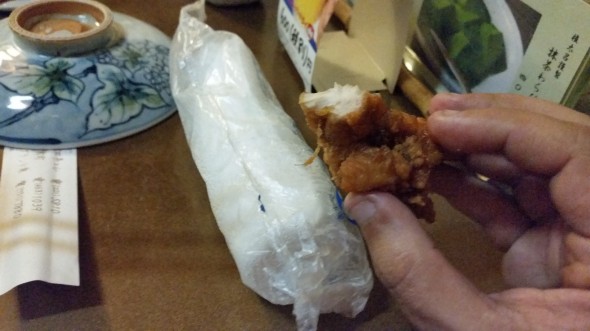 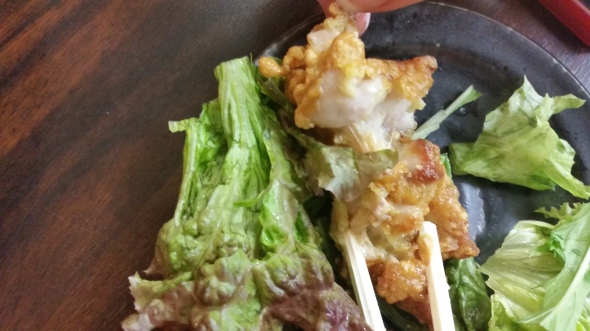 The cluckaholics were told about Mr. Miyagi’s from a couple of good friends and has been on the cluck list for a while now. We finally managed to tee up a time to try out another Melbourne Fried Chicken contender labelled as MFC (Miyagi’s Fried Chicken)

Mr M. menus each came with different pop culture icons on the back.

Mr Miyagi is Chapel street’s response to Asian fusion style restaurants like Chin Chin and Miss Chu. Its style can be categorized as modern Japanese. The place is funky and stylish with more tapas size servings. It also boasts a modern bar atmosphere with its fancy cocktails and fun stylish artsy decorations.

A great barman who wears a Japanese bandana and sports tattoos on bulging arms serves up good drinks to complement the meal. Including some pricy Japanese whiskeys

We arrived and immediately ordered drinks plus a few starters to get us going while we waited for our comrades. The starters were a serve of Edamame with dehydrated shiso salt, spicy pickles (kim chi) and some sweet potato crisps accompanied with an eggplant dip which sat well with all of us. 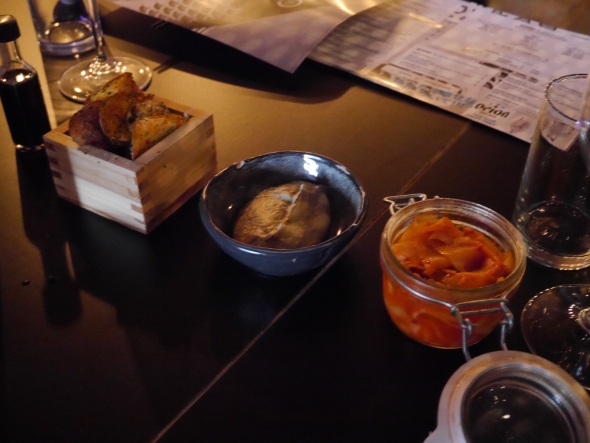 Chips, Edamame, Kim Chi – served up with a unique style

The Chick ordered a Hello Kitty Sour (Lychee and Vodka) drink which was topped with egg white and served in a funky glass. Not too sour, but a tasty beverage. 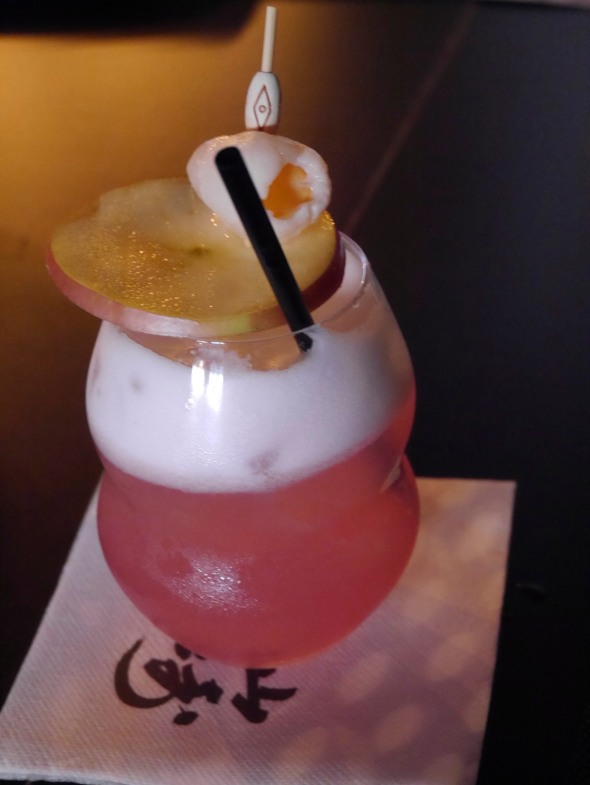 Hello Kitty Sour – it was pink and given a cute name, too hard to resist

For our mains we went for two orders of the 6 piece MFC (Miyagi Fried Chicken), Black Pig Gyoza, and mushroom skewers. The mushrooms were juicy and full of good flavours. The black pig gyoza had a more meaty texture than typical gyozas which we all enjoyed. The Chick beat back the competition and claimed the fifth black pig on the plate.

The MFC came in a take away container for extra character and consisted of 6 small wingettes and drummettes. It was cooked fresh, hot and steamy but wasn’t spiced at all, bummer! MFC came with a side of japanese style mayo which did a bit more flavour but certainly made the chicken heavier and a touch sweet. The serve was on the smallish side which didn’t sit well with the Cluckmaster. 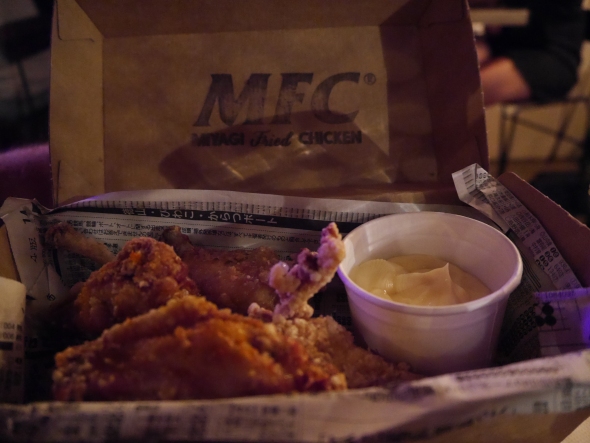 MFC makes its appearance in a unique serving dish

We still felt hungry so we went for a large order of Nigri and Sashimi combo which was more shashimi than sushi (only 3 on rice). But overall was good and the Japanese kingfish was very fresh – the only one that gave the Chick flashbacks to Tsukiji Fish Market in Tokyo. 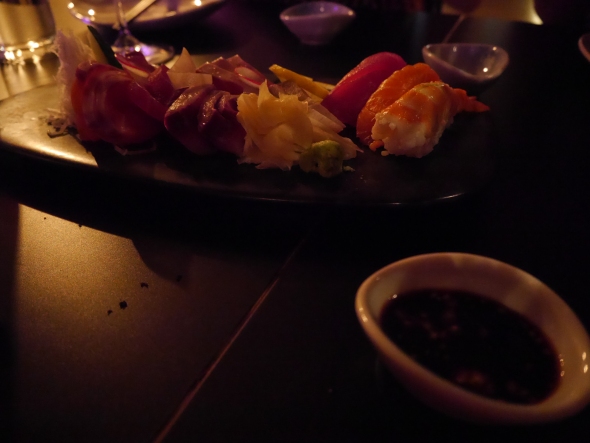 We finished off the night by ordering Miyagi’s apple pie made with granny and fuji apples, nashi pear and creme fraiche ice cream and the Kabocha pumpkin toast which was a white chocolate and pumpkin ganache, honeycomb, yoghurt sorbet and pumpkin ice cream. Both desserts were really good especially the Kabocha pumpkin toast which offered a tantalizing array of rich pumpkin flavors. The Chick was in heaven with the flavors of autumn dessert that reminds her of Thanksgiving.

Overall, Mr. Miyagi’s is a cool joint to hang out at however it’s chicken is not the best in Melbourne by our standards. It is worth it if your an in the area and are feeling a funky atmosphere. Having said that we still think that there are better options in that hood that can provide a crispier, and most importantly, spicier experience. You can find them on our Wall Of Clucks.