Our Christmas break was full of sunshine and good food. We had a free evening and hoped to discover another great Melbourne Fried Chicken place close to home, but we ended up with good atmosphere and disappointing fare at The Collection in Richmond. 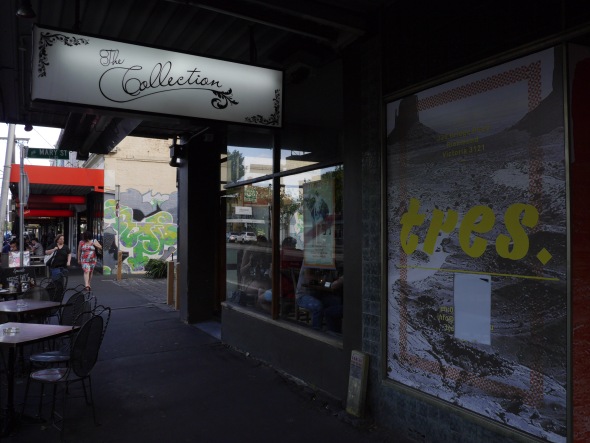 The space is the right size and the decorations and long bar made The collection a good place to hang out. The noise level was high from all the fellow patrons, giving the place a bit of a buzz. The waiter was attentive and quick with the drink menu. The Chick ordered a Side Car after being told the bartender could do anything. It came with sugar on the rim and everything!

The Mac n’ Cheese and sliders came first. There were 4 rectangles or fried cheesiness and they were sadly a bit over fried and dry. They weren’t nearly cheesy flavored enough, but there was a chipotle mayo on the side that gave them a bit of flavor. The sliders were pretty good, the buns were a bit too dry, but each came with a mini onion ring for an extra crunch and the sauce on the pork was sweet and tasty. These were the Chick’s favorite of the dishes. 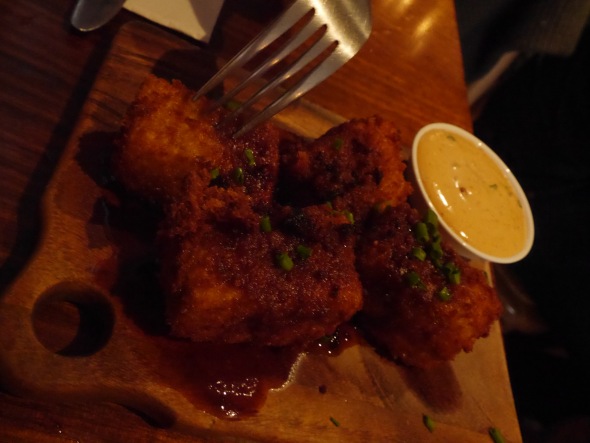 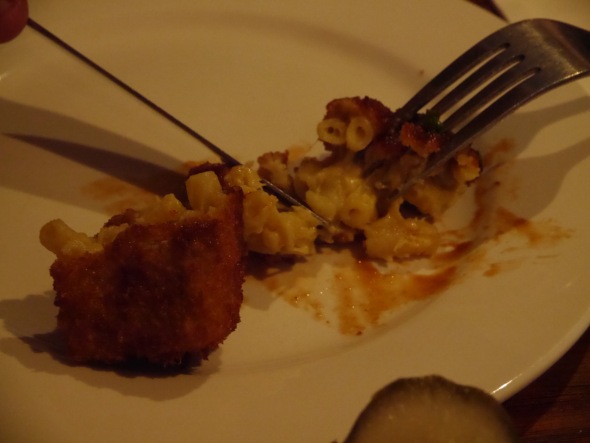 Macaroni inside the fried croquettes.

The Louisiana Fried Chicken order came shortly after the entrees but was a sad little chicken breast. Before we could complain, the waiter offered his apologies for the serving size and explained that a second serving was in the making to compensate.

A bit of chicken dipped in blue cheese sauce. Hit the spot for Hollywood, didn’t work for the Chick.

The first serve was fresh, but too thin, the breading had a good spice, but not that crunchy and seemed a bit dry because the chicken was so thin. It had clearly just came out of the frier, so it was nicely hot. The beans on the side were good, mostly kidney beans, a little bit of ham hock, with a thick sauce on the sweet side. There was a blue cheese sauce that Hollywood enjoyed, but the Chick felt that it was the wrong side for a low spice dish. The hot sauces on the table – especially the Habenero offered a nice kick.

Homemade hot sauces gave a much needed kick. The Habenero was very edible, not a chili challenge.

The second order was hot, dry, and more salty than spicy. It was a thicker piece of breast, but still not big enough to be a proper main dish. The first one had more flavor and the second order seemed to have been thrown together rather than a showcase of their best fried chicken. The Chick and Hollywood used the hot sauce to make it through.

Second order, thicker breast, but lacking in the spices the first order had

In summary, the food is certainly edible, but only worth it if you are going for the drinks or because you’re in the neighborhood.