The Cullen in Prahran has an upscale eatery attached called Gramercy Bistro. It had been written up as one of the top 10 best places for finger licken Southern Fried Chicken in Melbourne, so we had to check it out.

It is also conveniently on the way home from work for the Chick, so it was a perfect option for a quiet Friday night. We arrived in time for “Wet Hour” (like happy hour but wetter). The Chick went for the $5 Mojito which was a bit too sweet but good enough for $5 and Hollywood tried a local St. Kilda brew.

The menu hid the chicken in the Small Plates section labelled “Southern Fried Chicken Ribs”. As an American, the Chick found the phrasing odd, making it seem less like chicken and more like beef. Add to that some Jalepeno poppers, beetroot carpaccio, zucchini fritters and a burger to share and we had a meal.

We were warned that the poppers varied in spiciness, so the Chick was pleased to find they were on the hot side. Good, but we’ve definitely had better. 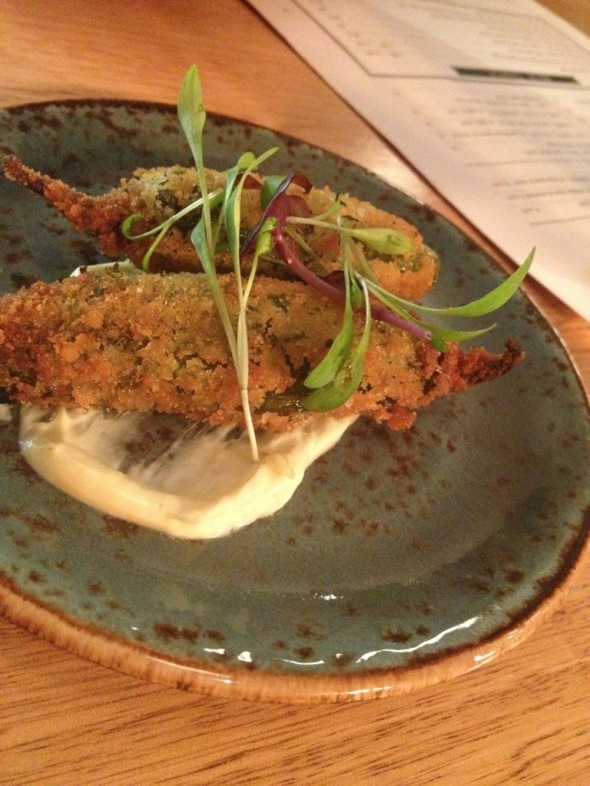 The beetroot carpaccio came with a stuffed zucchini flower, fried, plus walnuts, and pomegranates seeds. The flowers were nice, but the beetroot lacked a bit of flavor, it worked well wrapped around the zucchini flower.

The zucchini fritters were the best of the entrees, with a light flavor and lovely whipped goat cheese on the side. More please!

The Chick was very disappointed with the Chicken ribs. They were the right texture, good chicken pieces, fresh and came with a nice dill dipping sauce. But the breading was so salty it overpowered everything else. Hollywood was happy to consume the plentiful pieces left by the chick (a very sharable portion) but agreed it was saltier than he’d prefer.

The burger came from the grill, so was a bit charred. Not a star burger, but it was packed with yummy bacon and came with garlic aioli and nice thin crispy fries. 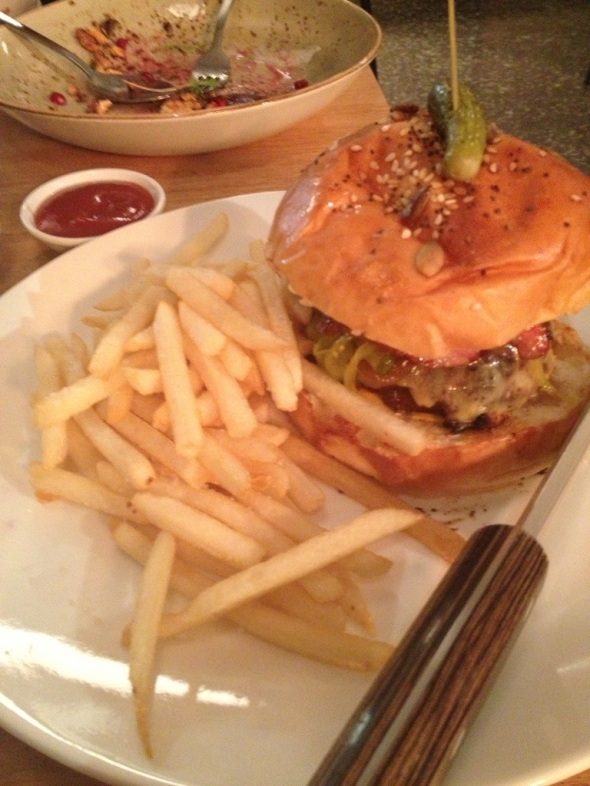 For dessert we ended with a delightful white chocolate cheese cake. It was a decadent morsel perfect for sharing that had the right balance of flavors.

The bill added up quick here, and the plates are hit and miss. The Chick wouldn’t go for the chicken, but would go back for the fritters, however Hollywood found a good option if you are in the neighborhood.