The Beaufort is a pub/restaurant in Carlton that Hollywood heard a lot about with regards to its great fried chicken. So naturally it was next on our list for another crispy Melbourne Fried Chicken adventure.

We arrived there and it had a fusion theme of Aussie pub meets American style bar with seafaring decorations on the wall. The fried chicken was on the specials board. We went through the menu and decided to go for an order of deep fried pickles with ranch sauce, the quinoa salad, the Out-N-Out burger (consisting of meat, cheese, mustard, ketchup, tomato, Spanish onion and shoestring fries on the side) and an order of the Southern Fried Chicken that came with a pico de gallo salad along with shoestring fries. We got a couple of cool brews to get us in the right mood. The deep fried pickles arrived first and were too hot to eat, so we stared at them longingly. They were crunchy and had a strong pickled taste that sat very well with us. The portion was big which was good for Hollywood. This was The Chick’s favorite of the night.

The burger was thick juicy and cheesy. The mix of cheese, juicy meat and sauces made a very saucy experience which Hollywood really enjoyed. The Chick ate her share, but felt she’d had better, maybe just in contrast the awesomeness of the fried pickles. 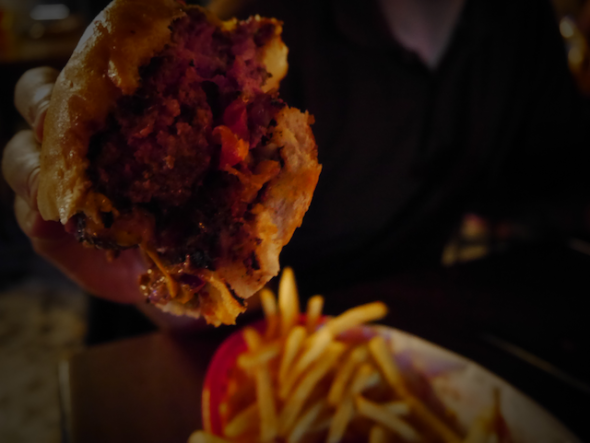 The main contender arrived next in a big basket with a huge bed of fries a bowl of pico de gallo salad and a mix of thighs and drumsticks of some crispy fried chicken. The chicken was fresh, hot and steamy. It was also very tender and had a prominent blend of spics that we really enjoyed. The coating/skin was single coated and spiced right. Hollywood is usually a fan of the double coating but found this style quite right. The only beef Hollywood had with this chicken is that there weren’t any breast/wing pieces. The accompanying salad was good and provided a contrasting fresh flavor. 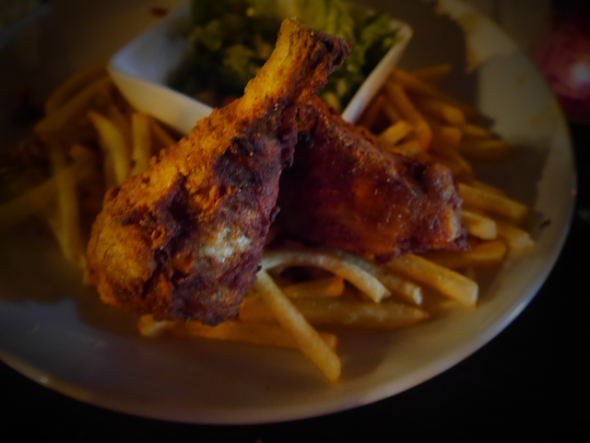 Last but not least, the quino salad accompanied with tomatoes was really great and had heaps of fresh flavors running through it and although we were really full we just couldn’t stop ourselves of completely smashing it even though we were already so full. Who knew a pub with fried foods would do fresh salads so well! Overall The Beaufort is a great place to be. It is low key, targeted at the University scene and just a great place to relax and enjoy some amazing food. The chicken is really really good at the Beaufort and so are many other dishes. Definitely worth a visit or two or more….